I’m a happy hour girl. I owe a lot to whoever invented the concept. Half priced appetizers and five dollar wine? What’s not to love?

Besides, I think there is a lot to be said for getting all of your socializing in and then being able to be home with a book (and a cat and a boyfriend) by eight.

In honor of my love of happy hours, and partially because it’s just fun, I’ve rounded up my favorite happy hour spots in metro Phoenix:

This one’s a given, and will top the list every time. Ask me anywhere I ever want to go for happy hour, I will pick North without fail. In fact, my friend Makenzie and I are such regular visitors to this establishment that we have our own table. Granted, we deemed it as such, but it is nice that there’s enough regularity to my appearances here to have something like that.

North has a board and bottle offering that rivals Postino’s. Actually (and I mean no offense to Postino’s here, because they also have a large part of my wine-loving heart), I think North’s is better. You get to pick between a pizza, bruschetta, or a chef’s board, and I almost always pick the latter. I’d recommend getting some extra bread, though. Mainly because the bread is delicious. 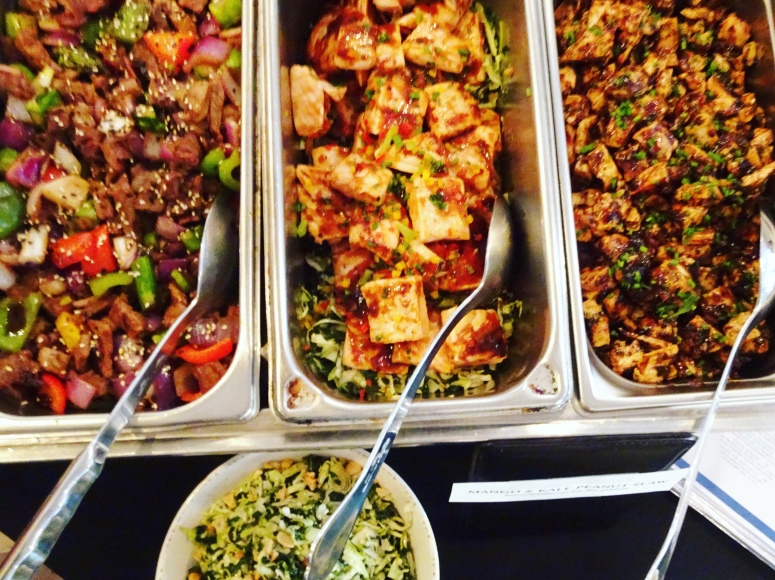 For a spot smack-dab in the middle of Scottsdale, the Montauk has the greatest New England island vibes. With clapboard walls adorned with fishing nets, the nautical vibe can transport anyone to the world of Blair Waldorf and Hampton lifeguards on… well, Montauk.

I had the opportunity to check out some of the Montauk’s new menu items earlier this summer, which is when I first experienced their happy hour items. Before that, I’ve only ever brunched here.

In addition to a great range of appetizers, the Montauk offers full meal options that are delicious and unique, like their new bowls! Plus, they’ve got a full bar and some delicious cocktails to keep you… wait for it… happy all hour. 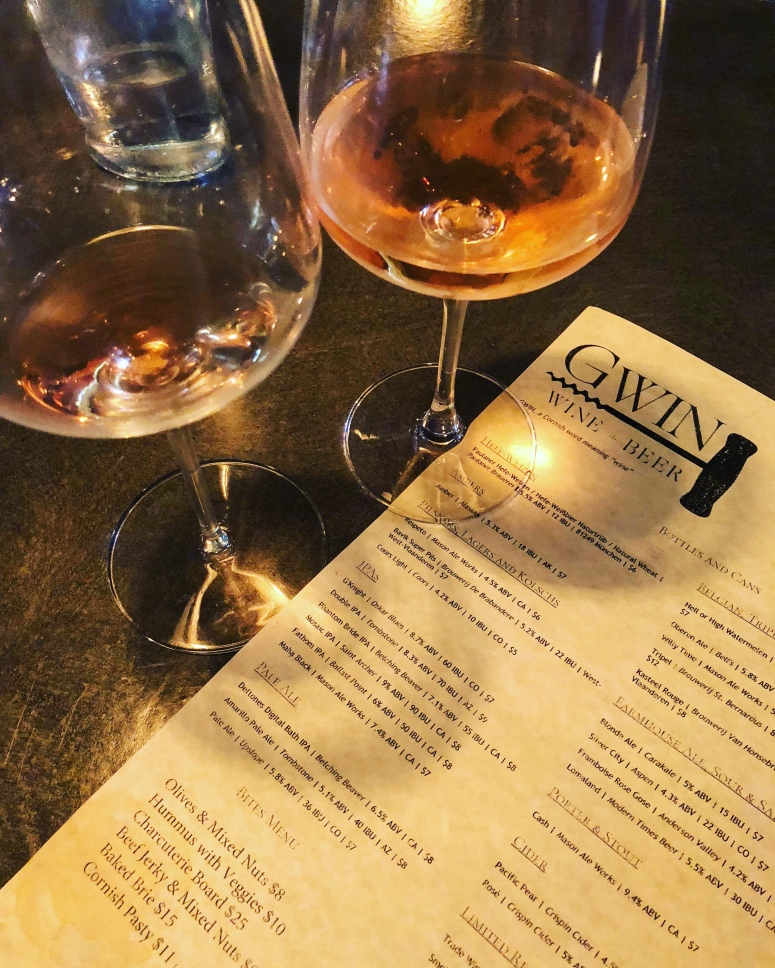 This is another recent discovery. I’ve been saying ever since moving to Scottsdale that I want to become a regular somewhere, and not in the way I’m regularly at North. I want to be a regular here in the sense that Ted, Robin, Marshall, Lily, and Barney were regulars at MacLaren’s. Now, I’ve only been to Gwin once, but this seems like exactly the sort of place that could make that oddly specific dream of mine a reality.

Gwin’s bar takes up most of its dining area, but that’s what’s great about it. You feel like you’re really there to get to know the staff, to learn from them, and to look up at the really impressive chalk map of their wineries and specials. There is live music every weekend (and occasionally on Monday, which is when I saw Jaty Edwards perform). The food offered ranges from the best baked Brie I’ve had in a long time to Cornish Pasty Co.’s pasties, with a charcuterie board in the middle. While this might not be the sort of spot I’d go if I was ravenously hungry, I do plan on returning for plenty more Chardonnay and finger foods… and then walking across the parking lot for dessert at The Baked Bear.

Yes, I do drink things that aren’t wine. I also like margaritas, and Blanco has some of the best. They also have a delectable queso dip that I could eat as an entire meal… and I have before, because it’s what tops their nachos. Blanco also has probably some of the best options for sharing plates out there, between their aforementioned dips and their gigantic cheese crisps. If you’re looking for a place to take a group, I’d definitely give Blanco a top-notch recommendation. 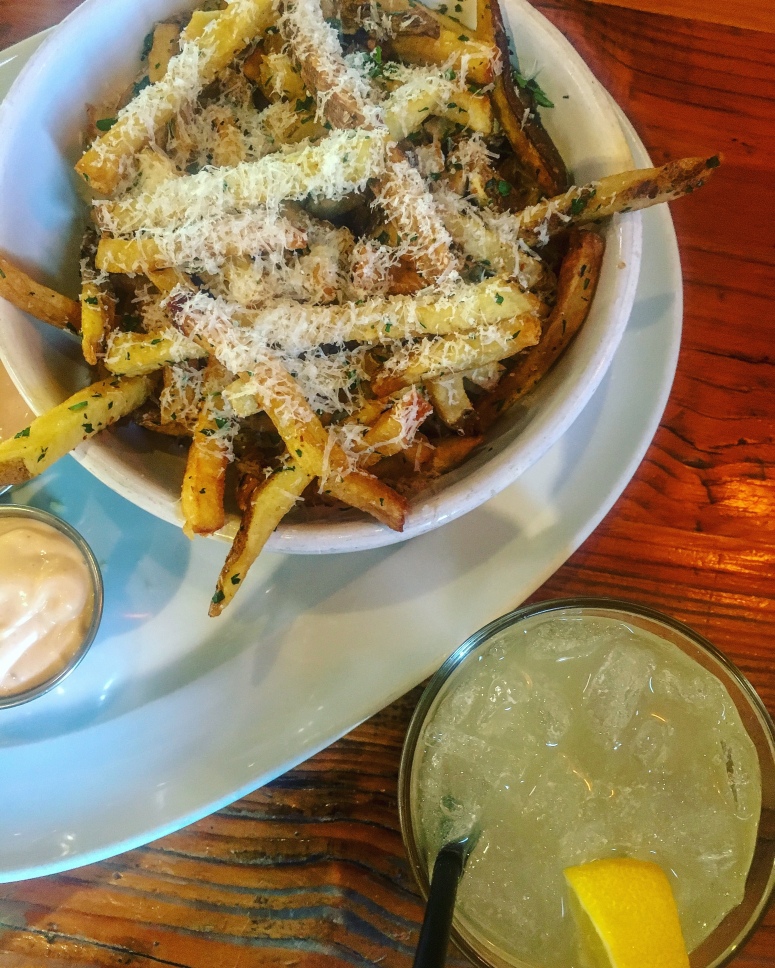 Oh, how I greatly miss living within walking distance of this gem. (Let’s start a petition to convince the boy to move back downtown so I can relive those happy hour glory days? Just kidding. Kind of.)

Phoenix Public Market is certainly one of the most recognizable spots downtown, partly because food trucks fill up its parking lot every Friday during lunch. But it’s quickly becoming one of the most recognizable happy hour haunts, too, and to that I say — of course it is! Their happy hour menu includes two of their best food offerings: Downtown Devil fries and a soft pretzel. Plus, they’ve got 5 dollar wine and beer and sangria, and a 5 dollar signature cocktail — the Lee Trevino, which is both gloriously refreshing and surprisingly spicy in the same sip.

Combine that with the fact that PPM is within walking distance of all the major sports and concert venues, just so long as it’s not five million degrees out, then you’ve got the perfect spot to get a quick bite and a drink before heading out to a game.

So, there you have it, my own little opinionated round up. And, granted, I part with the disclaimer that this is no way a comprehensive list, but rather the five spots that I frequent most often.

What are your favorite happy hours around the Valley? And for those of you checking in on this blog from out of town, I would love to hear your favorite local spots too… we can add it to the list of Things To Do for whenever I come visit. 😉 Until then… cheers! After all, it is 5 o’clock somewhere.

One thought on “The Happiest Hours Around Phoenix”

Born at 7 minutes after 7, this is everything that’s happened since. Lover of Light + food + life + love. My friends ask me to pick out their wine.

No offense to my boyfriend, but some of my favorite date are mother/daughter Thai food dates🍴Had the happiest day eating all of the veggies & tofu, planning trips, and laughing at Elle Woods’ antics with @robin.lameyer 💛🥂
Thinking about the weekend like... 8 more hours & I am SO ready 💭 Happy Friday, friends! • Ft. my all-time favorite long sleeve tee from @sunbeltclothing ☀️
I’ve decided to make 2019 the year of yes. Yes to spontaneous adventures, yes to concerts, yes to big-ticket trips but especially yes to this - showing my mamma around these canals this fall. Knowing I finally get to share such a big piece of my life with her makes me desperately wish time travel actually was a thing (but in the meantime, I’ll fill the calendar with other adventures to tide me over) ✈️ Where’s your wanderlust taking you this year? #WanderlustWednesday
Fun fact: I am *extremely* into sentimental value. Which is why I know I got myself a keeper of a boyfriend, who pays attention to the things I mention wanting for some sentimental reason or another. That includes this @homesick Northern California candle, which I remember mentioning a total of ☝🏼 time & my sweet guy got for me as an anniversary gift. So don’t mind me as I sit here for the rest of this three-day weekend relishing in the scents of apple cider & redwoods after the rain 🌲 What’s the best sentimental gift you’ve ever received?
I tried to make my skirt match the theme 🌹🥂 • 📸: @makenzie_middleton
Find someone who never says no to a breakfast for dinner date night 🥞 Pictured: blueberry pancakes & bacon from @ihop - because sometimes you just need the comfort food.